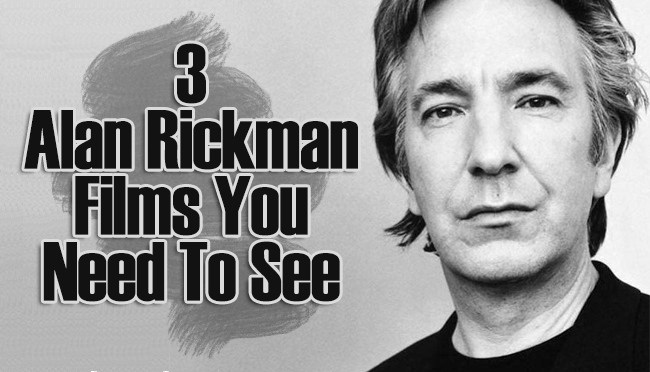 It is with a very sombre heart that I have to write this blog. Yesterday, Thursday the 14th of January 2016, the world lost one of it’s greatest actors- the wonderfully dry-witted Alan Rickman.

He passed away at age 69 and had been battling cancer.

Now, for those who haven’t known me for all my life (the majority of you, probably), you won’t know that Alan was my favourite actor of all time. For years it was my dream to wander around London and bump into him (I was about 14 years old… apparently that’s how meeting celebs worked!). I armed myself with as much of his filmography as I could, which has been a great help for compiling this post today.

He was probably most well known for his roles in Die Hard as the slimy Hans Gruber and Severus Snape in the Harry Potter Series (you have no idea how much it excited me to learn he got the role… Snape was my favourite character even before the films came out!), but he had so many more roles that need appreciating.

Here are my personal favourites. It was incredibly hard to whittle them down to just three; I originally had a list that was 16 characters long… but no one wants to read a blog that long!

Although Alan was well known for being a master villain, he could swiftly spin the other way and play a fantastically heartwarming character, too.

His character in Truly Madly Deeply is one of the greatest examples of this. Portraying the ghost of Juliet Stevenson’s boyfriend, Jamie, Alan is seen to take on a softer, cheekier character. The nature of the storyline meant that the character of Jamie needed to be gentle and loving, as well as show his cheeky, annoying side too.

I won’t spoil the plot for you, just in case you want to watch it for yourself (and you totally should!) but let’s just say that this film is incredibly apt for the sadness that many of his fans are feeling right now.

Plus you get to hear him use that incredible voice to sing… no, really!

The story of Michael Collins and the Irish Republic’s freedom is something that I have grown up hearing, having family who were in Dublin and around the rest of Ireland at the time it was occuring, so it’s easy to see why I grew up watching this film.

If it’s cool and calculating you’re looking for, Alan’s portrayal of Eamon de Valera is perfect for you. Even though you may sneer at his attempt at an Irish accent, it’s more accurate than you think as de Valera seemed to have a mix of accents including British, American and Irish (as far as I can hear, anyway!)

Starring alongside Liam Neeson who plays “the big fella” Michael Collins, you’ll get to see some quite tense interactions, especially at the film starts to draw to a close. Friends turning into enemies, ultimately leading to death… Alan gives us an insight into the rather complex, calculating mind behind such a strongly political figure of Irish history.

… and if that’s not enough, you get a glimpse of him dressed as a woman.

I’m willing to bet you’ve all heard about the unstoppable, invincible Rasputin, whether through books, music or word of mouth. The so called “mad monk” really was quite strange, and Alan is a joy to watch in this role, even though he will make your skin crawl.

With various scenes requiring him to act drunk, womanise a hareem or prophesise the untimely demise of the Romanov dynasty, this is defintiely one of the most diverse roles that I’ve seen Alan portray. With such a different character dynamic to the majority of his other roles, I’m certain that this was one of the more challenging for him. Nevetheless, in true Alan fashion, he made the character his own, giving the morally questionable monk a certain charm and charisma.

Even if you’re not a huge fan of history, this film is a great watch!

I think that we can all agree that the film and theatre world has lost a huge talent who will be sorely missed.He has many other films that I implore people to watch and hopefulyl enjoy as much as I did… and hopefully ass much as he enjoyed acting in them!

If you’d like more Alan film recommendations, feel free to drop me a message on Facebook or Twitter or below in the comments! I would be delighted to help more people recognise other works of his that are incredible!